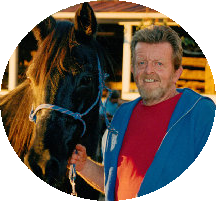 Tim Baxter was one of the founding members of Bit O’Luck Equine Rescue, Inc. Sadly, he passed away on February 9, 2012. It was under his urging that the Rescue was started as Timmy and Gail truly love horses.

They themselves were no longer able to care for horses but loved having them on their property. After several months and a lot of paperwork, Bit O’Luck was formed.

It has grown and flourished since that time, now keeping 4 full time horses and helping out several others. We have gained our designation for the Global Federation of Animal Rescues in December. It is amazing how much has been accomplished in such a short amount of time. None of this would have ever been possible without the kindness and generosity of the Baxter’s. These people have truly shown the spirit of giving to those in need. It is in that spirit that we at the Bit O Luck Equine Rescue would like to create the Tim Baxter Memorial.

At present, our list of contributors to the Tim Baxter Memorial Fund is below.

Bit O' Luck Equine Rescue's mission is to provide an environment through which neglected and/or abused equines are rescued from abusive situations, rehabilitated, retrained and then offered up for adoption to qualified care givers.